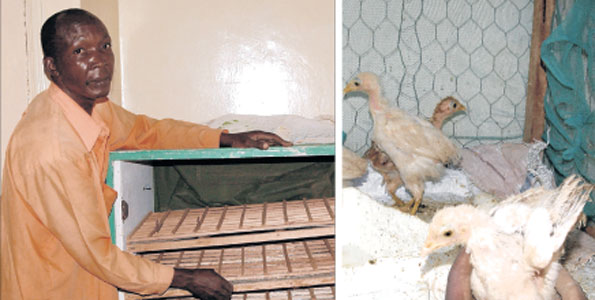 Communities in the lakeside region have traditionally relied on fishing as their main source of livelihood but with declining stocks, most fishermen are diversifying their sources of income.

Stephen Ogembo, 39, is one such man who has shifted from fishing in Lake Victoria to poultry farming.

‘‘Fishing has been the main economic activity in the region, but since the invasion of the hyacinth weed which continues to choke the lake, the stocks have been reducing tremendously and fisher mongers are left with nothing to sell,’’ says Mr Ogembo.

He says: Fishing in the lake has recently become a tedious job given that the main species in the fresh water body are disappearing and as some fishermen visit the lake at night with the hope to harvest more species, they get marooned by the deadly weed.

A number of them are forced to spend cold nights in the lake as they try to make ends meet. Some of the fishermen have died after being trapped for several days and nights in the carpet of weed. He however says poultry farming is a lucrative business and since he ventured into the business two years ago, he has not looked back.

The resident of Dunga beach in Kisumu says he made his decision one evening when his family slept hungry after he returned from the lake empty-handed. His nine children and two wives solely depend on him.

He decided to look for an alternative source of livelihood and borrowed Sh20,000 with which he bought 50 crates of indigenous chicken eggs. His brother, a local veterinary doctor, helped him to source for funding.

‘‘Each crate was selling at Sh200 and I bought 50 dozen which amounted to Sh10, 000. The remaining money went into constructing an egg incubator and a poultry kit,” he says.

The incubators can hold between 240 and 1,000 eggs and this translates to 1,240 chickens within 21 days and with all the chickens streaming alive. It takes 21 days for the eggs to be hatched inside the incubator.

He says his success in  poultry farming was motivated by his second wife who developed a passion for the business when he started it in August 2011.

‘‘Every morning, before I place a dozen of eggs into the incubator, I use a poultry kit to check egg fertility and assess progress during incubation,’’ says Mr Ogembo.

The local agricultural innovator says the kit popularly known as candler can assess the defects in an egg and also check its progress.

‘‘I came up with this concept after encountering challenges with  my egg incubators when I wanted to determine the amount of heat in there. Candler kit can select and detect the eggs to be placed inside the incubator and those to leave outside,’’ He says.

He says the innovation is now gaining popularity and that poultry farmers are buying the kit from him. A candler with a lighting system goes for Sh1,200 and one without a lighting system retails at Sh800. But farmers can also use an ordinary torch to examine the eggs.

He says with the candler kit, poultry farmers can determine which hens lay eggs that cannot hatch and are due for culling. It is advisable to select an egg for hatching and it must be less than seven days old because as the egg ages, the air space gets bigger.

During the egg incubation, he advises farmers to check the outward physical appearance of eggs and ensure that they are of uniform colour and size.

The kit is hollow with a lighting fixture which a farmer places inside the hole before lighting it in a dark room. This is done when the farmer wants to check the egg’s condition.

‘‘If the air sac in the less pointed side is sagging and big, it is a sign that the egg has stayed for too long and that it is  dehydrated,’’ says Mr Ogembo.

Two yolks in an egg means that it is unsuitable for incubation. As a result, the egg cannot be placed in an incubator to hatch since it has lost half the amount of water in it.

Since he started the business, Mr Ogembo says he has bought over 30,000 hens which he rears and sells to traders in bulk depending on the orders.
Mr Ogembo’s business has gained popularity in the region with big hotels, local institutions and traders visiting his home to buy the chickens.

‘‘In a day I can sell over 5,000 chickens to my customers depending on the number they order, one chicken retails between Sh200 and Sh300 for indigenous and sh500 for broilers,’ ’he says.

Mr Ogembo says the amount he is earning now cannot be compared with what he used to get from the lake. His earnings, he says, has immensely grown with 80 per cent profit.