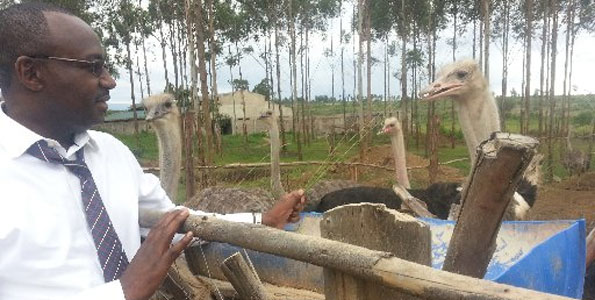 Peter King’ara, 44, has always been passionate about birds. He has travelled to different parts of the world looking for rare species to keep at his sanctuary in Gichiche Village, Othaya.

Under his Barefoot Venture project, the farmer-cum-lawyer keeps more than 30 different species of birds.

“I have gone as far as America and Britain to get some of these birds. I love birds and that’s why I have invested so much to grow my sanctuary,” he said.

Although he initially did not have plans of making money out of his bird collection hobby, after going through literature on the various birds at his farm, he discovered that there was potential to cash in on his passion.

“The birds that are rarely eaten like pigeons and peacocks have very beautiful feathers that fetch a lot of money in some countries,” he said.

Mr King’ara started his project in 2005 after visiting a friend, Babu Muthama, at his residence in Karen, Nairobi. The visit marked the beginning of his business.

The farm near Gichiche shopping centre which is 8km from Othaya in Nyeri is now home to birds that are rare elsewhere in the country. “I invested more than Sh2 million to start this project,” Mr King’ara said.

He says that ostrich meat can fetch a tidy sum since it is one of the most popular cholesterol-free red meat in the world.

Peacocks are mostly kept for beauty but while their breeding requirements are almost similar to chickens, they rake in earnings almost 100 times more.

“Besides, the bird’s tails fall off and grow back every two years, giving the farmer another opportunity to make some money. A single male peacock feather goes for Sh300.

Mr King’ara has seven ostriches in his farm which he bought from a farmer in Baringo as chicks at Sh12,000 each.

He uses them to promote domestic tourism. Local educational institutions and tourists visit the farm to see the different species of birds.

Mr King’ara says ostriches are on high demand in the Middle East and Europe. An ostrich egg goes for Sh3,000 and one bird produces up to seven eggs a year.

“A mature ostrich fetches about Sh450,000 while sale of peacock stock could earn up to Sh100,000 per bird. Eggs produced by the peacock earn a farmer Sh200,000 every laying season,” adds the lawyer.

He says that because of the nomadic nature of the peacock, it does not make a good breeder because it keeps on moving from the eggs. However, he uses turkeys for breeding of peacock.

The peacock chicks are removed from turkey’s care after 27 days to protect them from possible attack.

But since the land is not large enough to keep many birds, Mr King’ara says he plans to transfer them to his 180-acre ranch in Naru Moru where he will set aside about 40 acres to rear them. Structures to rear the birds at the ranch are under construction.

He says that apart from doing business, he wants to change the perception of many people who consider dry regions as unproductive.

The farmer has already transferred the ostriches to the ranch where he is also setting up Facing Mt Kenya Resort, which he says aims to tap Chinese and domestic tourists.

“I want to make it affordable to the local people and the Chinese market, which has not been taken care of properly in this country,” he says.

Mr King’ara adds that he will use his ostriches and three of the his horses to provide visitors rides around the farm and take for tour of Mt Kenya which is few kilometres away.

However, he says if the number of ostriches increases, he will sell some although a lack of abattoirs for the birds hinders him from selling their meat. A kilogramme of ostrich meat goes for Sh2,000.

The Maasai Ostrich Farm is the only outlet for the birds meat and eggs, which are in high demand.

The resort will cost about Sh250 million upon completion, which Mr King’ara says will be by mid this year.

In the same farm, located in the semi-arid part of Kieni, 50 acres are under horticulture whose produce he sells produce.

Mr King’ara has ready market for his produce which he cultivates on order. In a year, he says, sale of the produce earns him more than Sh15 million.

“I have been very busy with birds during the holidays and weekends. I now see myself transforming from a lawyer to a poultry farmer by investing heavily in this unique bird project,” he adds. “I have alternated between working at my law firm office in Nairobi and rearing rare bird breeds here.”

The Kenya Wildlife Service (KWS) issued him licence several years ago so that he could host some of the protected birds he found during his tours.

KWS officials discovered his unique bird collection after getting several applications from him seeking permission to keep ostriches and quails.

All these projects have four full-time employees.

He has used these projects to train local self-help groups on how to start income generating activities instead of relying on white collar jobs or staying idle due to unemployment.